To keep everyone safe, the branch has been holding meetings virtually or outside at a distance.  Here, Ardelle Brown poses with a Hard Won, Not Done T-shirt during an informal executive board meeting on July 20, 2020 in Gateway Park in Cedar Falls. Sandy Lawry has been selected to be this year’s Named Gift Honoree for the Cedar Falls-Waterloo Branch because of her outstanding support of AAUW.  This award is given annually to a member who has served several terms as an officer, made significant financial contributions, and/or contributed to the group’s mission in other ways.

The recipient receives a framed certificate inscribed with her name, $500.00 is donated to AAUW Funds in her honor, and she is listed in the yearbook with past honorees.

Several members nominated Sandy. They all enjoyed working with her on AAUW projects since she joined the branch in 2014.  Here are a few of the ways Sandy has supported the mission of “advancing gender equity for women and girls through research, education and advocacy.”

All mentioned Sandy’s willingness to help with any task that needs to be done.  She is always cheerful and encourages the people she is working with.

Sandy served two years as Co-Vice President of Fundraising, and held the fundraising garage sale at her house for four consecutive years.  During that time the branch also initiated a new fundraiser of shoe-collection and sales.   Sandy was a major collector and bagger of shoes both years, and offered her garage as a shoe-collection site this past year.  She also set up an AAUW account at Stuff, Etc.  Members can use this account to contribute items to our scholarship fundraisers at their convenience.  Sandy still picks up the cash we accumulate and maintains our relationship with Stuff, Etc.

During the past two years, Sandy served as Co-Vice President of Programs, and provided informative programs and outstanding speakers for our dinner meetings during that time.

Besides these major responsibilities, Sandy has done many one-time tasks that simply needed to be done.  For example, she took the reservations for the State Convention the year it was held in Cedar Falls, and she continues to help keep Women-In-Motion participants active and involved.

Sandy is a true leader with many constructive Ideas for our group and has been continuously involved. She has earned the recognition of Named Gift Honoree, and the committee hopes she will continue to be a valued member of AAUW Cedar Falls-Waterloo for many years.

Please join us for these public legislative forums.
All forums are at Central Middle School, 1350 Katoski Dr. Waterloo.

Topics to be announced.

The 2018 Transition Scholarship was awarded by Karen Agee to Nouran Othman.  The $1,000 scholarship will be used for expenses as Nouran continues her education at the University of Northern Iowa in accounting and public administration.

The Transition Scholarship is awarded to a non-traditional female student currently attending Hawkeye Community College who will enroll in at least 6 credit hours at UNI. Applicants must have a minimum cumulative GPA or 2.5 or more on at least 30 transferable credit hours from HCC. Preference is given to students majoring in a non-traditional field of study. For more information go to www.hawkeyecollege.edu
search scholarship or https://cedarfalls-ia.aauw.net 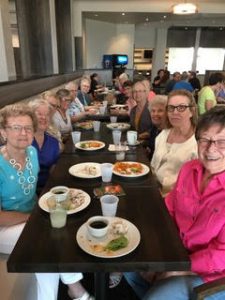 Cedar Falls-Waterloo AAUW is collecting shoes to raise funds for our scholarships. We need 2,500 pairs, and are halfway to our goal. The collection period ends May 31. Please contact Pat Higby about your donation! December 11, 2016 from 3-5 p.m.
See email for details. Please come and bring your spouse and/or a friend. Treats from board members. 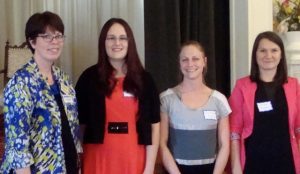 The 2016 Named Gift Honoree for American Association of University Women , Cedar Falls Branch, has been announced. 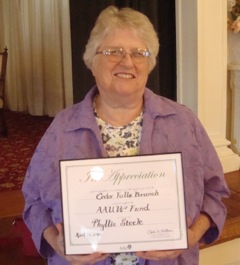 Phyllis Steele fifty- two-year member of the Cedar Falls Branch was presented with the award in recognition of her outstanding leadership in AAUW since joining the organization in 1964.

She has been on many committees, however treasurer for many years, and auditor each year when not the treasurer. She has supported the mission of advancing equity for women and girls through advocacy, education, philanthropy and research.

The Named Gift award began as a way to honor a member of the local branch for her contributions in support of the mission of AAUW. A $500 contribution has been sent to AAUW Fund in Phyllis’s honor. AAUW Fund helps support Legal Advocacy, Elect Her, $tart $mart, endowment earnings supporting fellowships and grants

To find out more go to aauw.org.